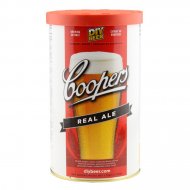 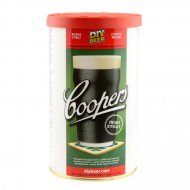 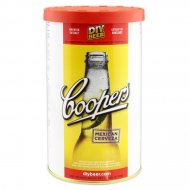 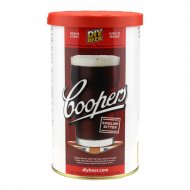 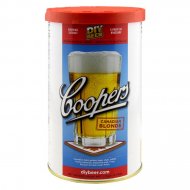 They make an excellent beer, 1 week to ferment & best kept 4 weeks before drinking.

Coopers Brewery produces these DIY beer kits in Australia for the homebrew market.
They are produced from premium barley grown in South Australia. This area is recognised as some of the most beautiful malting barley regions of the world.  Coopers home brew kits require additional brewing sugar or beer enhancer (1kg) to ferment them.

The instructions on Coopers DIY specify Coopers beer enhancer and Coopers carbonation drops for priming however any brand beer enhancer or brewing sugar will work fine. For added mouthfeel and body use a darker dry malt extract or beer enhancer for the darker beer styles.

Coopers Brewery is the worlds largest exporter and manufacturer of DIY Brewing Extracts.

Coopers began producing DIY beer making kits back in the early '70s when legislation was changed to allow brewing at home. The first beer making kits were 20-litre "bag in a box" wort packs with the beer being brewed in the bag.
In 1982 Coopers introduced a low-temperature evaporation method that allowed them to gently concentrate the wort which reduced the weight and size of the package. This reduced size allowed Coopers to expand sales of their DIY Beer brew products to retailers across Australia and to begin exporting, initially to North America and Sweden.

Now Coopers is the worlds number one selling brand of DIY beer making extracts and it is exported to over 26 countries arround the world.
The Coopers DIY Brew Brewing Kits include everything you need to make your excellent tasting beer in 4 simple steps Mix, Brew, Bottle, Enjoy!
Coopers range of premium quality Brewing Extracts makes it possible for you to produce a variety of beers from crisp, refreshing Lagers through to hop filled IPAs or hearty Stouts. Each Brewing Extract is formulated to create true to character beers.
Specifically developed brewing adjuncts enhance beer quality, increase opportunities for recipe formulation and complete your brewing experience.

how to brew beer at home

How to brew beer

What is in a beer kit

Are beer making kits any good?