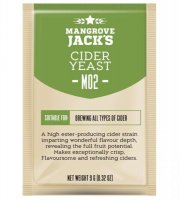 Buy the best homebrew cider yeast for all the different types of cider making from Brew Mart Sheffield.

The different types of cider making are hard, sparkling, sweet, dry, apple or any fruit, champagne and beer to name a few.

The term hard cider is used to differentiate cider making which, has been fermented and is an alcoholic drink instead of fruit that has just been pressed and is pure fruit juice. By yeasts very nature, all yeasts start fermentation, which creates an alcoholic beverage, and in this category, it can be called hard cider. 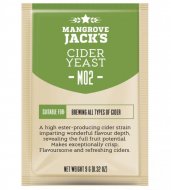 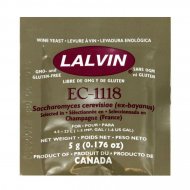 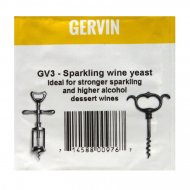 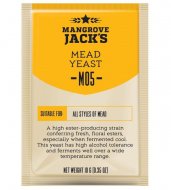 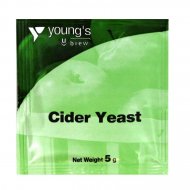 Before you start, it is advisable to take some time to think about your yeast choice for making the best hard (alcoholic) cider. Cider objectives can be simple to complex.

All cider is Sparkling. However, some can be more sparkling than others, and this is achieved by using a yeast for sparkling cider making, such as GV3 or EC1118 or Young's dry cider yeast. The latter two contain a bayanus yeast strain which is particularly good for an apple cider making yeast.

A good choice is Champagne yeast strand of white wine yeast to brew hard cider due to its vigorous agent that also preserves the apple flavours of your cider.

There are cider-specific yeasts from commercial yeast producers and a whole world of yeast strains originally selected for beer or wine that can also apply to cider making.

Let's explore some variables that go into choosing a yeast strain for cider making and then a range of specific alternatives.

There are three broad attributes of yeast strains for fermentation to make a yeast choice to match your apples and your objectives.

EC1118 from Lallemand: This is a traditional choice among the Champagne-style yeasts. This yeast contains a bayanus strain of Saccharomyces and has a high alcohol tolerance of about 18%.

A high alcohol tolerance level would not likely come naturally from apples themselves. However, if you add sugar to make apple wine, this yeast would be a good neutral choice. The character of the apples would come to the forefront. The finished cider is usually bone-dry with no hint of sweetness.

Mangrove Jack's Cider Yeast M02 is one example of a yeast explicitly produced for cider brewing. This cider yeast has "aromatic" strains, produces fresh fruity esters, and has a lingering finish.

Safcider from Fermentis: This cider yeast is another bayanus strain that is effective at fermenting cider even under challenging conditions. Safcider has a wide fermentation temperature tolerance of 50 to 86 °F (10 to 30 °C).

What about using a beer or ale yeast when home brewing cider?

Cider is a fermentation process, whereas beer is a brewing process. However, a novelty that seems to come from America is to use beer yeast such as Nottingham Ale Yeast when fermenting your cider, and this produces a clean, crisp finish to your cider.

In this section of yeast strains, you will find a division between fairly neutral/somewhat fruity yeasts in lager and ale strains compared with very character-driven speciality yeast strains for specific exotic effects. Many beer yeasts are not as alcohol tolerant as wine yeasts, but they bring a wide range of aromatic characters.

You may experiment with other types, such as mead yeast.

Saflager S-23 from Fermentis: This dry lager yeast was derived originally from the VLB-Berlin German brewery. Saflager produces fruity and estery lager beers in its primary role and can bring similar effects to ciders. However, it may subdue it compared with fruity wine or fruity cider yeasts. As with lager fermentation, you should ferment it between 53 and 59 °F (12 and 15 °C). Saflager has a lower attenuation profile than some other lager yeasts and may leave slight residual sweetness.

Adding yeast to your juice is an important step, as it starts the fermentation process. The yeast consumes the sugars present in your liquid and transforms them into alcohol. The more sugar your brew has initially, the higher the alcohol content.

SOME TIPS FOR SUCCESS