Malbec wine kits are produced using a variety of purple grapes which are used in making red wine.

The malbec grapes tend to have a vibrant dark colour and robust tannins, and these grapes are one of the six grapes which are allowed in the blend of red Bordeaux wine.

The French vineyards of Malbec are now found mainly in Cahors in South West France, due to it becoming less popular to grow in Bordeaux when in 1956 frost killed up to 75% of the crop.

Malbec is also susceptible to many grape hazards mainly frost as mentioned earlier but also coulure, downey mildew and rot. The area of Cahors decided to replant the Malbec vine even though this area was also devastated by the cold weather of 1956.

The variety is becoming increasingly popular and is now grown in warmer climates around the world. The Malbec grape has a thin skin and as such needs more heat and sun than both the Cabernet Sauvignon or Merlot to mature.

It ripens mid-season and can contribute an intense colour, a considerable amount of tannin, and a unique plum-like flavour to add complexity to claret blends. 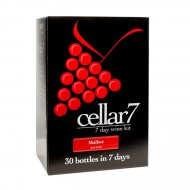