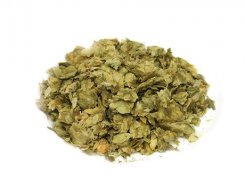 Beer Hops are the essence of beer brewing for home or commercial brewers. Brew Mart believe in offering the best possible ingredients for the home brewer. We quickly pack vacuum-pack our hops in robust metallic foil packs for maximum freshness and minimum exposure to harmful sunlight and oxidization.

Brew Mart has been a proud supplier of quality malt, grains, hops and yeast for the home brewer and the micro-brewery trade since 1981.

Hops are the tiny cone-shaped flower heads of the Humulus lupulus plant, which provide both bitterness (IBUs) and a wide variety of flavours to an extensive range of beer styles.

Be it bittering or aroma, tropical, resin, noble-hop spice or earthy English undertones, hops are one of the vital flavour ingredients to brewing a quality beer.

The Alpha Acid is what provides the bitterness. The higher the level, the more robust bitterness.

Hops for the home brewer or micro brewer which Brew Mart have in stock are varieties of American Hops, European Hops, Hop leaf, New world Hops, and U.K. Hops.

What hop to use with which beers?

Particular hop varieties are associated with styles and beer regions.

In addition to cellulose, water, and various proteins, the chemical composition of hops consists of compounds essential for imparting character to a beer.

Hop cones contain different types of oils, such as Lupulin and Oleoresin.

The most important chemical compound within hops is alpha acids or humulones, which are responsible for the bitter taste of beer.

Hops contain lupulones or beta acids. Lupulones are desirable for their aroma contributions to Ale.

The principal components of hops essential oils are terpene hydrocarbons.

The first documented use of hops in Ale is from the 9th century. Until this period, brewers used a "gruit" composed of many flowers and bitter herbs, including burdock root, dandelion, marigold, horehound, ground ivy and heather.

The initially documented hop cultivation was in the Hallertau region of Germany; however, there was no evidence of using hops in brewing in Germany until 1079.

Later in the 13th-century, hops began to threaten the use of gruit for flavouring.

The first hopped beer in Britain came from Holland around 1400.

In 1471, Norwich, England, banned the use of the plant in the brewing of Ale, and there was a condemnation of hops, calling it " a wicked and pernicious weed".

Hop plants like the same type of soil as potatoes. The primary potato-growing states in the United States are also major hops-producing areas; however, not all potato-growing areas can produce good hops. For example, soils in the Maritime Provinces of Canada do not contain boron that hops prefers.

Historically, Ireland has not grown hops but imports them from England. By 1752 more than 500 tons of English hops were imported through Dublin alone.

Important production centres today are the

2. Zatec(Saaz) in the Czech Republic,

5. Canyon County, Idaho (including the communities of Parma, Wilder, Greenleaf, and Notus).

The main production centres in the U.K. are Kent (which produces Kent Goldings hops), Worcestershire and Herefordshire. All of the harvested hops are used by brewers in beer production.

The harvesting of hops starts at the end of summer. Once the bines are harvested, they are separated and dried in an oast house. Dry hopping involves reducing the moisture content in the hops. The hops are spread out on the top floor of the oast house, and heating units on the lower floor dry the hops by heating them. Once dry, the hops are compressed into bales using a baler.

The need for an increased labour force at harvest time meant hop-growing had a significant social impact. Around the world, labour-intensive harvesting work involves large numbers of migrant workers. Whole families would travel to participate in the annual hop harvest. They would live in hoppers' huts, with even the most minor children helping in the fields.

In England, many workers picking hops in Kent came from the eastern areas of London.

Workers also came from Birmingham and other Midlands cities to pick hops in the Malvern area of Worcestershire.

The appalling living conditions endured by hop pickers during the harvest became a scandal across the region of Kent and other hop-growing counties.

In 1866 due to the scandal, the Society for the Employment and Improved Lodging of Hop Pickers was formed.

Today there are many different varieties of hops used in brewing. Historically, hops types were identified by

1. Geography (such as Hallertau, Spalt, and Tettnang from Germany, 2.The farmer's name who is recognized as first cultivating them (such as Goldings or Fuggles from England),

The expert breeding programs at Wye College in Wye, Kent, were started in 1904. Prof. E. S. Salmon. was the prominent instigator, and through his work, Brewer's Gold and Brewer's Favorite for commercial cultivation were released in 1934. Before his death in 1959, more than two dozen new cultivars were released. Since its release, Brewer's Gold has become the ancestor of the bulk of new hop releases worldwide.

Hops tend to become unstable when exposed to air or light, and they lose their potency after a few months of storage.