Traditional ginger beer is usually a non-alcoholic beverage which is naturally sweetened and carbonated.

Traditional ginger beer making  usually results in a non-alcoholic beverage which is naturally sweetened and carbonated.

Its origins date go back to the colonial spice trade with the East and the sugar-producing islands of the Caribbean.

Ginger beer became popular in England in the mid 18th century and was initially brewed in Yorkshire and then became famous throughout Britain. 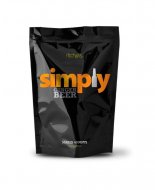