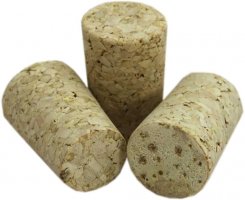 1. Wine bottle corks made from either natural cork or synthetic and plastic corks which are reusable.

3. Stoppers or Bungs made from either cork, rubber or plastic, solid or with hole to fit an airlock

4. Crown caps for a profesional finish to your beer bottle. Available in different colours 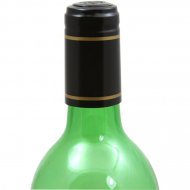 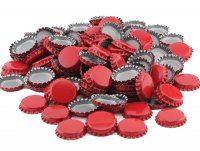 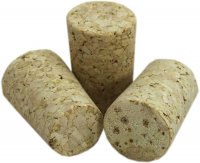 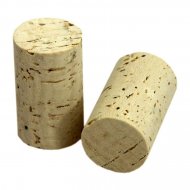 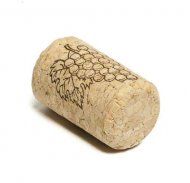 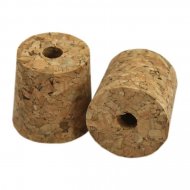 Cork Bung Solid or Bored to Fit any Standard Demijohn 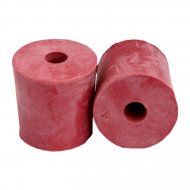 Rubber Bung Solid or With Hole to Fit Standard Demijohn 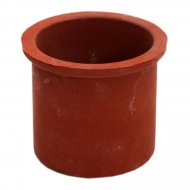 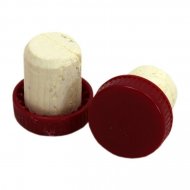 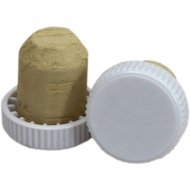 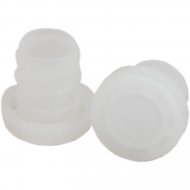 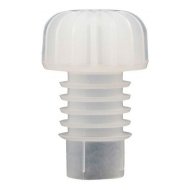 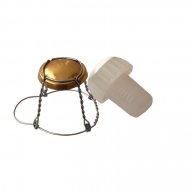 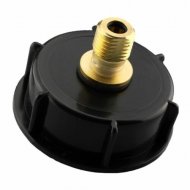 2" Barrel Caps with either Hole, Pin or S30 Valve for Standard Barrel 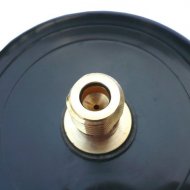 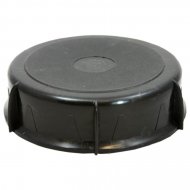 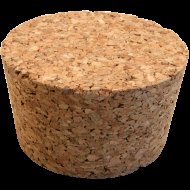 Tapered Cork Bungs No.1 to No 8

Wine corks are a stopper or seal used to seal full wine bottles.
They are typically made from cork .that comes from the cork oak bark.
However, widespread synthetic materials are also used.

Sixty-eight per cent of all cork produced is used for wine bottle stoppers.
Corks are manufactured for still and sparkling wines; the latter is bottled under pressure, forcing the corks to take on the mushroom shape. They are then fastened with a wire cage known as a muselet.

Synthetic corks
Up to the mid-17th century, French vintners did not use cork stoppers. Instead, they had been using oil-soaked rags, which were stuffed into the necks of the wine bottles.
How and when the first use of cork-based wine stoppers is unclear.
It is speculated that the Benedictine monk Dom Pérignon may have invented them. The earliest date attributed to stoppers is about the 1600s.

As of the early 21st century, the problem of cork taint became prevalent, leading many producers to stop using corks in favour of other methods.
By 2010 screw caps became especially prominent in Australia and New Zealand.

Due to issues with cork taint, the cork industry invested in new techniques and equipment, reducing TCA chemicals in wine by 95 per cent.

Like other cork products, natural wine corks are made from the bark of cork oak trees. Its bark is peeled away carefully and then cut into sheets before processing. The oak trees themselves are not cut down, and only about half of their bark is removed at any one time.
Cork oaks are not harvested until they are 25 years old, and then the harvest occurs every nine years after that, which allows to bark to regenerate.. After the third harvest, the bark is sufficient for producing wine corks.

Portugal is the largest producer of wine corks, at 52.5 per cent, followed by Spain, Italy, and Algeria. The majority of Portugal's production is in Alentejo, at 72 per cent of the national output. Sixty-eight per cent of all cork is produced for wine bottle stoppers.

Products
Wine corks can be made in several ways:
Natural wine cork stoppers are made from a single piece of bark and have the best flexibility, keeping the seal strong for ageing wine for over five years.

Collimated corks are made from a single piece of bark, but they have pores filled with cork dust and glue. They are easier to remove from a wine bottle and are suitable for medium ageing.

Cork stoppers are moisture-resistant, slow to deteriorate, help the wine age, and provide a waterproof seal.
The stoppers are frequently associated with a perception of high-quality wine, especially as cheaper alternatives are familiar with the lower-cost wine.

Due to the cork having a cellular structure, it is pretty easy to compress when inserting it into a wine bottle. The cork will then expand, and it forms a seal that allows a miniscule amount of air, which helps the wine mature.

The interior dimension of the neck of glass bottles tends to be inconsistent. This inconsistency makes the ability of cork to seal through variable contraction and expansion a fundamental attribute. However, some unavoidable natural flaws, channels, and cracks in the bark make the cork highly inconsistent.

Still wine
In diameter, corks typically are 24–25 millimetres (0.94–0.98 in). Lengths vary, usually based on the length of time needed to age the wine.
Simple wines stoppers are commonly 38 millimetres (1.5 in) long for medium ageing wines.

Sparkling wine corks are commonly 30 millimetres (1.2 in) in diameter and 50 millimetres (2.0 in) in length.
The corks are compressed to about 60–70 per cent of their original diameters when pushed into the bottle. The corks need to be held in place by wire cages known as muselets.
Sparkling wine corks are usually built from three separate sections and are called agglomerated corks.
The typical mushroom shape that occurs in the transition results from the bottom section's being composed of two stacked discs of new cork. These are cemented to the upper portion, a glue and ground cork conglomerate. The bottom section of the cork is in contact with the sparkling wine. Before inserting a sparkling wine cork, it is almost 50% larger than the bottle's opening. The sparkling wine cork starts as a cylinder and is compressed before insertion into the wine bottle.
As time elapses, their new shape becomes more permanent, and the distinctive "mushroom" shape becomes more apparent.
The ageing of the wine post-disgorgement can, to some degree, be told by the cork, as the more extended it has been in the bottle, the less it returns to its original cylinder shape.

1. Plastic is not vulnerable to cork taint and thus better protects the wine.
2. A shortage of available cork for use.
3. They are also easier to get out of a wine bottle since they do not disintegrate
4. Plastic corks are reusable.
5. They can be used for homemade wine or replace a cork or cap on a store-bought bottle.
6. Are designed to be used with all standard wine and champagne bottles.
7. The ribbed design ensures a secure seal to prevent spoiling.

The initial reason to use plastic wine corks is not in dispute.
Plastic corks are not subject to cork taint. However, many wine experts feel that wine corked with plastic will not age as well as when corked with natural corks. Plastic allows for less air exchange, and the wine does not benefit from maturation.

Most wine experts agree that wine with plastic wine corks is fine if one plans to consume the wine quickly. However, they still think you should use cork for wines you plan to store.
Unfortunately, therein lies the problem stored wines are much more likely to suffer from cork taint, and since the taint may not be visible, one may store wines that could become undrinkable.

The use of plastic wine corks to address cork tree shortage is another point worth raising. Presently cork trees in the forests of Portugal can provide enough cork for 100 years of wine production.

However, many people fear that greater reliance on plastic might make cork trees another victim of society's advancements. Cork trees could lose their purpose and thus their lives if all wine manufacturers change to other corking methods.

However, over-dependence on harvested corks could create a problem in cork supply if more trees are not planted.

The happy medium may be to use plastic wine corks for young wines meant to be made and consumed immediately. Homebrew makers of wine and wine manufacturers then may choose cork from cork trees to be used for wines meant to be stored a few years before drinking. The problem of cork taint is not eliminated, but this problem tends to occur in a tiny percentage of stored wines and is thus likely only to pose an occasional problem.