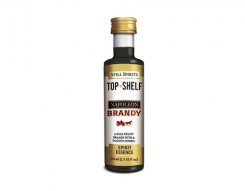 Brandy is produced by distilling wine to make a spirit, it is usually between 35 to 60% alcohol by volume and is usually enjoyed as an after dinner drink.

Brandies can be aged in wooden casks, or alternatively, some are coloured with a caramel colouring thus imitating the effect of ageing, and others are produced using a combination of both ageing and colouring.

Brandy can be produced from any fruit wine such as pear, plum, or apple (Calvados) as is usually labelled with the fruit it is produced from.

The taste of home brew brandy is governed by the fruit it is produced from, and its maturity, however brandies generally are sweeter than whiskey and taste of flowers, fresh and dried fruit and citrus zest